Taylor Anderson is the author of the Destroyermen series.

Taylor Anderson is his entry on Wikipedia.

His biography may be found on his web site: http://www.taylorandersonauthor.com/index/biography.html . 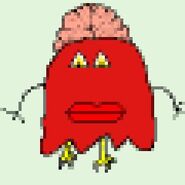 Taylor's Monster on his Blog site 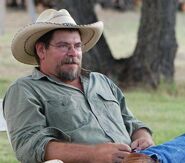 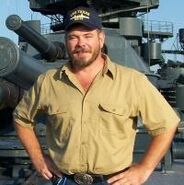 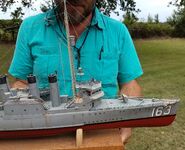 The midsection of Taylor Anderson's model of USS Walker by (C) Donald Johnson.

Detail of the bow of Taylor's Walker model, note the railing details, a line on top and middle with a mesh below the middle line. The deck where the anchors lay and the fore gun. portion of photo by (C) Donald Johnson used with permission.

Three pics from Taylor's web page, first his monster you see when he posts on the Discussion part of his Blog. Second is Taylor sitting in a lawn chair. Third is Taylor aboard the USS Texas seen on dust jackets and inside rear cover of the paperbacks in colorful black and white. 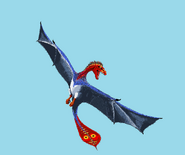 Isak at the gate

Art (C) by Taylor Anderson showing his vision of Earl Lanier and Rolando Rodriguez with one of Lanier's mess attendents one saving the Coke Machine at GQ.
Add a photo to this gallery
Retrieved from "https://destroyermen.fandom.com/wiki/Taylor_Anderson?oldid=11224"
Community content is available under CC-BY-SA unless otherwise noted.